This site uses cookies to help us improve your experience 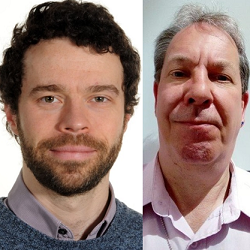 Getting stuck into CoPro

It was a grey October afternoon, when my (Richard’s) inbox started filling up with messages from colleagues about a recently released research funding call in my subject area. Having spent the previous few years conducting a pilot study1, the timing of the call seemed almost ideal! I had about 10 months until the deadline and enthusiastically set off on the journey of pulling together the grant application. I had increasingly started to hear about ‘co-production’ in research and after some reading around, I decided to utilise this exciting but slightly mystifying approach.

I was a novice to co-production and there was a mine field of terminology to negotiate (co-initiation, co-design, co-decision, co-delivery, co-evaluation). I read several useful resources, such as those from NIHR INVOLVE, which outline the key principles and features of good co-production in research. However, I was still left a little lost and ended up on a workshop in London hearing about different co-production approaches and examples. I soon realised that there wasn’t a strict definition of co-production and definitely no step-by-step guide.

First, there was a condition-specific patient panel. I was very fortunate to have this panel almost ready made from focus group work conducted as part of the pilot study. The panel had previously started to explore design issues and I quickly reconvened the group to thrash these out over a sandwich. We met on several occasions and had further email conversations. I was keen for this not to be a tokenistic process and I slightly nervously put forward major design decisions for debate. The patients had first-hand experience of the condition of interest and of being part of a research study and subsequently gave many great suggestions! An example of an output from this panel was the addition of a third arm to the study design (quite a major change!).

Second, I visited a national public panel in Nottingham. This group meet regularly to input into different research projects and provided a different perspective to my local panel. They were impressively knowledgeable about different research methods and they didn’t hold back in giving me a bucket full of recommendations.

Third, we (myself and other members of the research team) engaged with a wide range of non-patient stakeholders. The idea behind this was that although co-production should have patients and the public at its core, it should go beyond this. We were proposing an ambitious nationwide primary care dental study, which would be one of the biggest of its type ever conducted in the UK. We worked with primary care dentists, dental hygienists, dental nurses, pharmacists, public health commissioners, consultants in public health, statisticians, NIHR Clinical Research Network (CRN) managers and clinical leads from 7 other potential research centres. There were many practical issues and again many design iterations.

Finally, we hosted a ‘co-production grand session’. The idea behind this was to bring together all the contributors into one place, feedback on our journey so far and allow debate on the remaining issues. We set a date at the end of March and sent out invites. We were slightly nervous about anyone turning up and about how the session would work with such a varied group. We were pleasantly surprised! We had over 25 attendees representing all the above mentioned groups, including patients. We had video links to the other potential centres (venue choice, with good video conferencing facilities, was an important consideration here). After a short introduction we broke out into smaller groups and considered the design issues in three areas: recruitment and setting; interventions and outcomes; follow-up and retention. We considered an impressively wide range of topics from ‘how to classify a smoker?’ to practical issues around ‘excess treatment costs’ for primary care dentists.

The co-production grand session in action 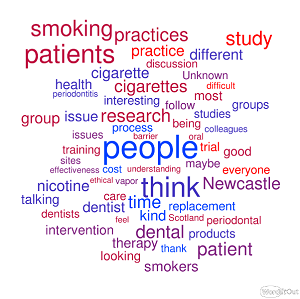 The co-production process was a lot of hard work. There were several late nights doing everything from pulling presentations together to making name badges. However, it was fully worth it! I’m really pleased with the resulting research proposal which, if funded, should deliver a study that works well for patients, practitioners and researchers.

What advice would I give other researchers considering doing co-production? At times I was overwhelmed with the number of suggestions and recommendations. I soon learnt that it’s impossible and impractical to take them all on board. I made notes of them all, went away and discussed with my colleagues, decided on a plan and then presented back.The grand session was a great forum for this. I also learned that co-production for research is in its infancy and there’s not currently one recommended strategy, each project will be different. There are also practical issues, for example, you need funds to pay for meeting refreshments, patient expenses and vouchers. This is fine once a project is funded but for development work (as in this case) it’s a bit of a grey area. I was kindly supported by the Research Design Service (RDS) Public Involvement Fund (for the patient/public aspects) and by my local academic unit (School of Dental Sciences, Newcastle University). As well as providing access to funding our local RDS was a great resource of information, advice and support during this process – definitely talk to your RDS early on!

In conclusion, I was pleasantly surprised by the co-production process. It’s been a messy process but we have ended up with an impressive and robust research proposal that we are really proud of. The funding application is soon to be submitted. Fingers crossed!!

You can’t practice dentistry without patients, which is where I come in; I have plenty of experience of that. Where practitioners bring undoubted skills, I bring teeth, which thanks to them, are still mostly my own, and I also bring knowledge from years of being on the receiving end of drills, syringes, swabs and various pointed implements, although it was a chance conversation with my own dentist that led to a referral to the Newcastle Dental Hospital, and subsequently volunteering to join Richard’s pilot study.

That said, I wasn’t expecting, eighteen months down the line, to be invited to become a patient co- applicant on a major research project. However, I do have a bit of experience in research funding applications and project management too, so I’m delighted to be involved in what is a critically important piece of work which has national (and dare I say it, international?) significance.

I’ve been impressed by the enthusiasm and commitment of everyone connected with the project. As Richard says, there are a lot of new things to learn about funding applications, and about study design and management, but we are all raring to go, and looking forward to the challenge.